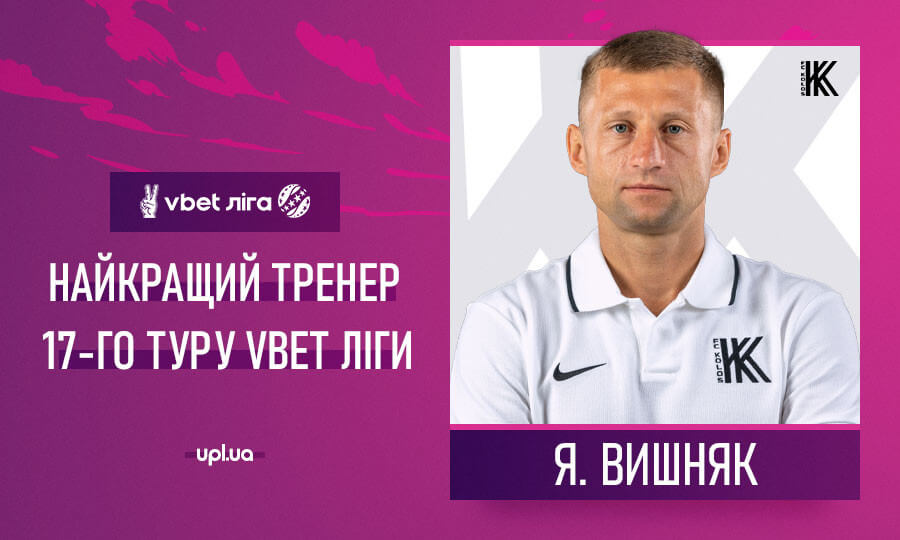 The Ukrainian Premier League together with the All-Ukrainian Association of Football Coaches summed up the results of the 17th round of the Ukrainian VBET League 2021/22, and recognized Yaroslav Vyshniak as the best coach of this game weekend!

Recently, "Kolos" decided on a head coach, giving a 39-year-old Vyshniak, a trustworthy loan and official status of the club's veteran. Yaroslav Vasyliovych significantly stabilized the team's results, which was confirmed by the away victory over an opponent who had previously taken points from "Kolos".

Therefore, the winner of the 17th round of the VBET League is the head coach of Kovalivka's "Kolos", Yaroslav Vyshniak. His wards beat Kharkiv's "Metalist 1925" (1:0 on a foreign field), beating their neighbor in the standings.

(importance, surprise, strength of the opponent, historical and tournament component)

This match was far from the distribution of higher places, but was important locally. In case of victory, the hosts could climb to the middle of the table, closer to the top half. The guests would bypass "Metalist 1925". It will be recalled that the teams have known each other since the First League, and then "Kolos" could not beat Kharkiv's team - both face-to-face matches ended in a 0-0 draw.

- Difficulties in lining up and managing wards - 4

If "Kolos" retained combat readiness for the Kharkiv departure, the losses of "Metalist 1925" could be considered significant. Defender Zhychikov, midfielders Batyushin and Kryskiv, forwards Derek and Ponomar were unable to play due to injuries and illness. Also, although several players returned to the game, it was difficult to assess their readiness after injuries. The result of the personnel crisis was a decline in results - the fifth consecutive defeat, the fourth - without scoring goals.

- Skills in working with staff - 5

Compared to the previous match (home victory 1:0 over "Veres"), the coaching staff of Kovalivka's team made two changes in the starting lineup, both can be called significant and directly effective for the outcome of the match. Instead of Roma, the experienced Petrov returned to the defense, and Diego Santos came out instead of one of the attacking midfielders - Churka. The Brazilian scored the winning goal.

(variety of tactics, changes in the course of the match, use of the human factor)

The scheme of the guests, depending on the phase of the game, can be interpreted as 4-2-3-1 or even 4-4-1-1. From the first minutes, "Kolos" showed sports aggression, seizing the initiative and pressing opponents to the goal. During the most productive period - the first third of the match - Kovalivka's team created much more opportunities, and during a massive multi-wave attack pushed the ball into the goal of "Metalist 1925". After a goal in the 28th minute, they played competently in a row, with equality in possession of ball, inflicting much more strikes and playing much more efficiently in the final third of the field.

(if the team under the leadership of the coach for several rounds in a row shows clear progress, continuous improvement of results, coaching innovations)

"Kolos" has scored 10 points out of 12 possible in the last four rounds. The unbeaten streak is interesting in that in each of these matches Kovalivka's team scored strictly one goal. Over the last month, Vyshnyak's wards have significantly improved their away results - "Kolos" scored seven of the 11 away goals under the leadership of Yaroslav Vasyliovych.

Winner of the 17th game day in the nomination "Coach of the tour" VBET League:

The average score is 4.6

Congratulations to Yaroslav Vasyliovyc on his well-deserved recognition!